After a short hiatus, the HOWiezine is back and to the theme for issue 14 was Coffee. Personally, I’m not a coffee fan, but I couldn’t miss a chance to participate, so I signed up without being inspired as to what I’d do.

I did something thinking and I figured I could use my aversion to coffee as a part of my concept. I’ve also seen more Star Trek than I’d like to admit. The Borg are a great enemy and they have an awesome line they use when they encounter civilizations who try to beat them as they go around conquering the universe: “Resistance is futile.” Now we’re talking…with that in mind, I began to sketch. 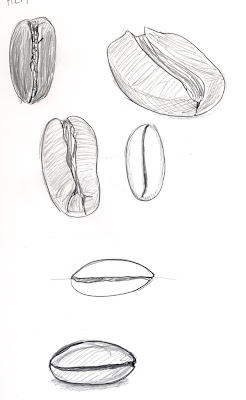 After getting the coffee beans down, I wanted to create an old-school “hypnotic” effect with a coffee at the very center. Sure, I could’ve used lines spiraling inward, but the idea of using a coffee “stain” as the rings seemed better.
Since I don’t drink coffee, I substituted hot chocolate to make the rings. The original rings were a bit light, so I had to darken them a bit in Photoshop. 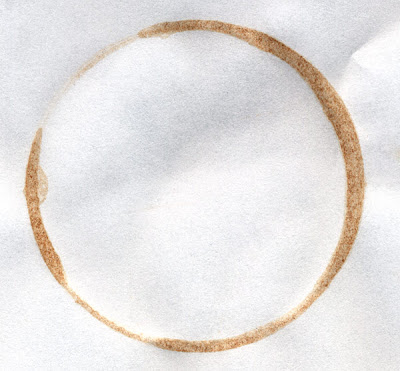 I then converted the “coffee” stain to black and white so I could better blend the rings into the background in Photoshop. Here’s an early stage composite of the layout: 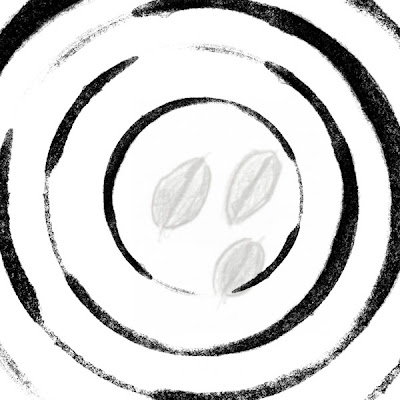 Next up, I took my coffee bean sketches and digitally inked the best one in Illustrator. I added color for the bean. I also added a red “eye” like a cyborg to give it a more menacing feel. 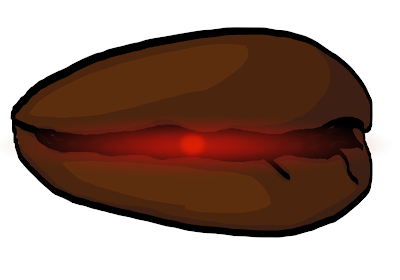 I layered in the coffee bean, added a background texture, duplicated and blended the coffee rings into the composite image. I decided to add in the type “Resistance is futile.” It started out bold, but I gradually blended the type so it was a bit more “subliminal”. Here’s how it looked before I finished blending and adding the lighting effects: 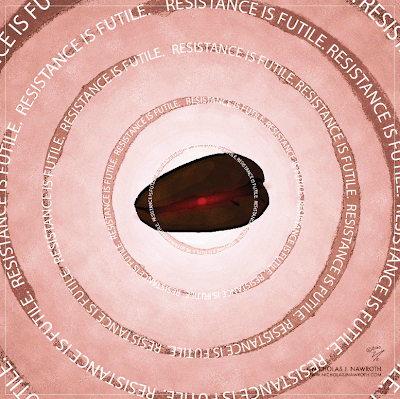 Next I added blending and lighting to create the final image for page one: 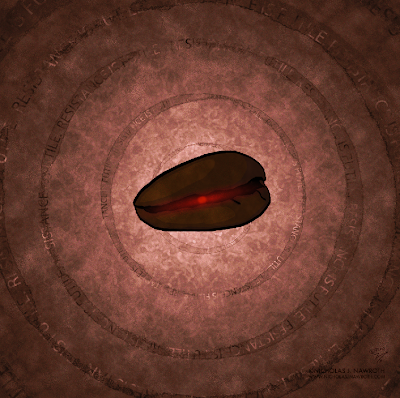 Now my dilemma: I had a great page one, but no clue as to what to do for page two! As I was working on page one, I kept thinking of how I could tie in the second page. My previous ‘zine entries had a poem as the second page, but it didn’t seem appropriate for my chosen concept.
I had finished page one and still hadn’t had a good idea for page two yet. I went on to work on another project and let the idea marinate in my subconscious for awhile. When the solution came, it was so simple I should’ve thought of it sooner: take the cyborg coffee bean and duplicate it to fill the entire back page. I had considered making several different coffee beans for variation,but in keeping with the cyborg theme I simply used the original bean. Here’s the resulting image for page two: 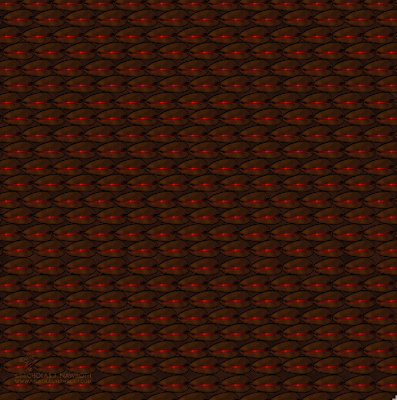 Another fun HOWiezine project under my belt! Can’t wait for HZ-15!