I was invited to participate in the Say Something Poster Project. Jason, one of the project founders, liked my work on the Haiti Poster Project and asked me to join in this new endeavor. This poster project gives designers the chance to “say something to inspire, motivate, and educate teenage kids.” Phase one would include public voting to narrow the field down to 100 posters, which would then be narrowed down by judges to 25 semi-finalists then to 10 finalists whose work would hang in this year’s charity of choice.

How could I resist? So naturally, I accepted. Then I realized that a) the project was due during the height of the holiday season b) I had a ton of other projects at the time and c) it was a short timeframe to work with!
My initial thoughts were centered around a “revolution” style poster, but with a hand holding an light bulb. Within the bulb, the filament would be illuminated and spread out sparks or stars that would illuminate the world. Somehow, though, it just wasn’t coming along like I envisioned. I think the idea is solid, I unfortunately did not have time to explore that option more at the time. Perhaps I will revisit it later this year as a personal project. 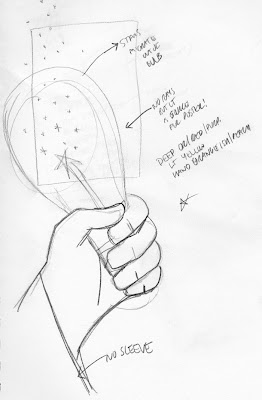 I put aside the project for awhile and worked on my other priority at the time. After some thought, I remember a phrase I had made up based on an article I read: “Encourage change, be more revolting.” It’s a bit snarky and I thought an interesting play on words. I figured it would be best to keep a type only solution because of the limited timeframe I had left and because I wanted the kids to actually read the words and think about them, not be distracted by imagery.
Anyway, my thought was that kids should be encouraged to be rebels in that they should ask questions and push boundaries to shake up the status quo for the good of the world. I created a textured background that was cracked and broken as the base. I took the type and distorted it to give it a bit of energy and to keep it from being anything but boring and normal. I kept to a warm color palette to keep the poster vibrant, interesting, and energetic. 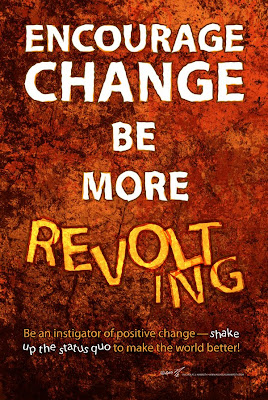 I just learned that I did not make it through the first round of voting, Looking back, I’m honestly not quite sure my true intent came through on the final design. However, I’m fond of it personally so it’s hard for be to be objective. What do you think?

2 thoughts on “Say Something Poster Project”