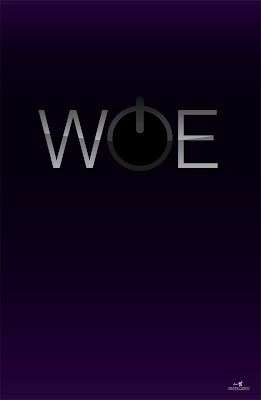 Yesterday, we had 80+ mile per hour winds blow through our area and knocked out power to about 90,000 people. While my work lost power, I was fortunate to have power at my house. As I was talking with a neighbor about the situation he mentioned the abbreviation “woe” that he saw on a store that had no power. I realized the double meaning of this and thought it would make a great image if done properly since in this day an age, we are so tied to our electronic devices that when the power is out, not only are we With Out Electricity, we are woeful about the lack of access, games, and other entertainment these devices provide.

I was trying to figure out the simplest metaphor for having no power and as I woke up this morning, it hit me: a power button gone dark. The trouble is I couldn’t make the background light either, otherwise it would ruin the mood. So it took a bit of tweaking to get the levels of dark just right on the text. Then I had to figure out just the right kind of dark for the background. I wanted to convey a sense of the power going out, so I added a gradient to the background where the black surrounds the text and goes a bit lighter near the top and bottom to convey a bit more texture and motion to the piece.

3 thoughts on “WithOut electricity”