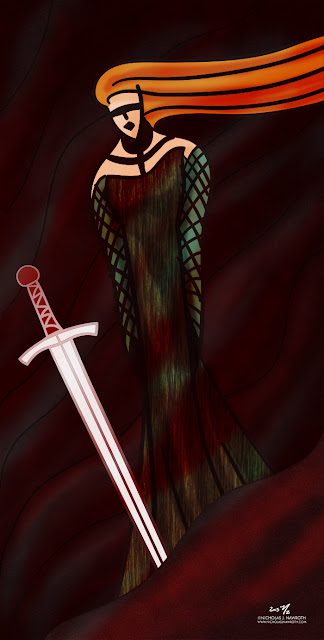 As I was working on my Agent Danger! piece for a gallery’s call for entries, I got hit with the flu. As I was recovering and working feverishly (almost literally!) to complete that image, I reached a point where I was getting frustrated with AD. I took a break and for whatever reason, I began to think of this image I had I done a long time ago in my sketchbook of a woman standing with a sword with smoke behind her.

I actually stopped working on Agent Danger! and begin to flesh out this image instead. It came together very quickly (I finished it all one Friday night) and actually inspired to complete Agent Danger! the next day. Not bad getting two images done as I was recovering from my illness.

As for the title, I still didn’t have a name for this image. I began to just look at the image and reflect on what it meant to me. I also had iTunes playing in the background and while I was thinking about the name, “kyrie eleison” started playing. “Kyrie Eleison” means “Lord, have mercy” and somehow seemed truly appropriate for someone who is contemplating taking up a sword, presumably to go out and dispense justice with it, albeit reluctantly, since it would mean taking lives.

Below is the original image from my sketchbook of what I originally titled “Woman & Smoke”. 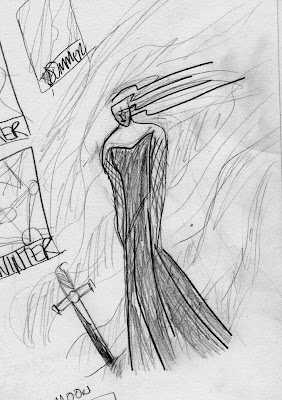