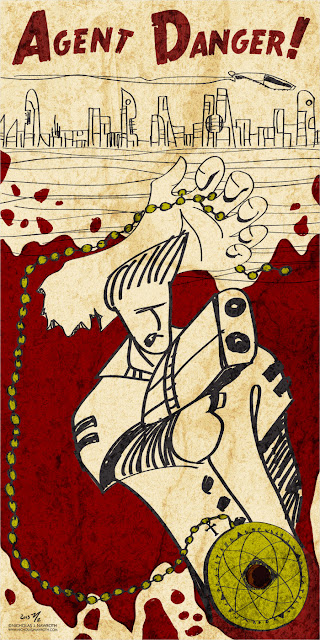 I’ve had the concept of Agent Danger! in my head since my college days. The concept was simple: a futuristic Blade Runner/Secret Agent main character that solved gritty and strange mysteries. I would tell the stories in comic book style, but not using the traditional comic book dimensions. For the 2013 version, I decided to keep the color palette at three colors: red, black, and gaudy yellow ala Frank Miller’s Sin City.

I started out with a traditional panel structure, but as this work evolved, I felt having one “continuous” panel made more sense and added to the feeling of the piece. I incorporated a few interesting elements to give a sense of discovery (you’ll have to figure them out on your own) as your eye moves around the piece.

My motivation for finally completing this piece was a call for entries for “comic book style” art at a gallery in L.A. that I’m associated with. However, soon after I began work on it, I got hit with the flu which took me out for a solid five days. The deadline was less than a week away and I had barely started. Still not feeling 100% I worked my way through to completion on the last day I could submit entries!